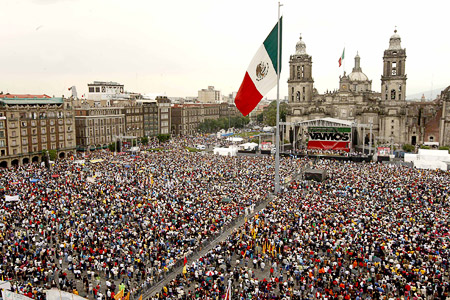 These days, Mexico is increasingly often added to the list of failed states.The country started to spiral downwards following the signing of the 1994 North American Free Trade Agreement (NAFTA)which exposed its economy, finances, and trade to the devastating pressure from the US. Mexico's industry and agricultural sector are overwhelmed by the flow of imports supplied by the country's northern partner, the result being a tide of bankruptcies after which masses of people are forced to turn to the criminal underworld for survival. Criminalization in Mexico has reached unprecedented proportions, and the death toll from daily shootings in the country exceeds by an order of magnitude the casualties suffered by the US in Iraq and Afghanistan. Widespread poverty (nearly total poverty among the country's Indians), rampant unemployment which particularly affects the younger strata of the population, chronic housing problems, and lack of healthcare leave Mexicans battling permanent stress.

In every respect, Mexico can be regarded as a failed state. Its administrative machine is corrupt as never before, and the inefficiency of its governments over the past three decades led the legitimate authorities to lose grip on vast chunks of the country's territory which are instead run by drug cartels with the help of their partners in local administrations and law enforcement agencies. The vacuum of legitimate power is especially visible in Mexico's provinces bordering the US.

Mexico's former liberal leaders Carlos Salinas de Gortari, Ernesto Zedillo, Vicente Fox, and the incumbent president Felipe Calderon routinely resorted to nationalist rhetoric to avoid being perceived as “pity-Yankee” by the constituency, but invariably asked for Washington's blessing right at the phase of the election campaign. It is an open secret that in Mexico friendship with the US guaranteed a pass to presidency regardless of candidates' actual ratings. Felipe Calderon owes his presidency to obviously rigged elections in which he outpaced his populist rival Andrés Manuel López Obrador, a frontrunner who was unacceptable to Washington as Hugo Chavez's potential ally.

No doubt, Mexico has not seen a president more dependent on the US than Calderon, the leader dubbed Mister Yes in the US Department of State. Calderon is aware of the nickname and pretends not being offended, while slamming his predecessors in private conversations for driving the country so deep into a crisis that the US help is oftentimes simply indispensable.

Mexico's war against drug cartels which already counts four years is inspired and supported by the US.According to the Mérida Initiative enacted in mid-2008 (also called Plan Mexico by its critics) the campaign into which the US has poured over $1.5 bn is to ensure the routing of the criminal groups based on both sides of the US-Mexican border. The CIA and the US Drug Enforcement Administration (DEA) are launching covert operations aimed at provoking conflicts and infighting among the drug mafia's leaders, but there seem to be no serious results even after the plan has been in effect for years. The situation is the same as in the case of Plan Columbia: during its implementation the escalation of operations against drug cartels somehow used to be paralleled by an intensification of the drug inflow into the US.

The bloody confrontation in the region bordering the US from the south led US Secretary of State H. Clinton to liken the frightening developments in Mexico to the events that marked the rise of the drug mafia in Columbia in the 1980ies. The hint was not hard to grasp. The armed “security groups” of Mexican drug cartels are evolving into a considerable force in terms of their total fire power and maneuverability. It is also alarming that they enjoy the support of the most disadvantaged part of the population.

US President B. Obama voiced his disagreement with H. Clinton by stressing that the vitality of Mexico's democracy is beyond question. What H. Clinton was talking about, however, was not the quality of Mexico's democracy (which does evoke serious questions) but the proliferation of increasingly assertive paramilitary formations in the region stretching south of the Rio Grande. The US Administration will predictably revoke its support for Calderon should bombs made by Mexican drug cartels warring over spheres of control start exploding in the US.

Speaking at the conference MexicoAt Its Bicentennial: Breaking Free of Paralysis? which was organized by The Economist, Calderon did describe as arrogant and easy-minded the notion that the war on drugs was nearing the end. The inability of Calderon's government to beat the drug cartels' armed groups makes the US brace for the worst-case scenarios. The US is reinforcing its border with Mexico, dispatching additional forces to California, Arizona, New Mexico, and Texas, and generally strengthening its police in the region. Dozens of drones are patrolling the border searching for trespassers and the construction of new security infrastructures is underway.

Washingtonwill do whatever it takes to shield the US territory from the spread of Mexico's perilous instability. The CIA, FBI, and DEA are in the process of expanding their networks in Mexican cities and a binational intelligence center has been established in the country to continuously monitor the activities of criminal groups across its territory.

Calderon's failure to counter the drug cartels and – from a broader perspective – his government's inability to reverse the current economic decline which boosts Obrador's chances to stage a comeback practically invite the US to bring to the logical completion the occupation of Mexico. Potentially, the deployment of US troops in Mexico with the goal of maintaining stability is a realistic option. Two years ahead of the next presidential race, a pool of pro-US media with Televisa y Televisión Azteca at the helm floated a new campaign of intimidating the population with the Obrador threat. The thrust clearly is that leaving it to the “civilized Yankee” to run the country is better than facing the advent of a Chavez-style “dictator”.