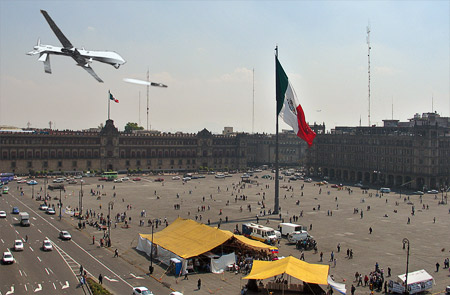 All the security services of the US are busy with the creation on anti-drug and anti-terror “defense line” in Mexico. They were especially successful during the presidency of G. Bush Jr. when they raised to power the most “manageable” president in the history of the Aztec country: first Vicente Fox and than Felipe Calderon. These politicians, who hid under patriotic statements their affiliation to “neo-liberal internationalism”, have been sticking to the pro-Empire course almost on all main issues of domestic and foreign policy. This led to Mexico’s comedown on the international arena especially in Latin America. One can hear more and more often people talking about the imperial occupation of Mexico as if it is an accomplished fact. The analogy, which comes to mind, is the US’ occupation of Iraq and Afghanistan simply without bombing and missile attacks. Calderon handed his country to the US by stealth under the pretext of “inevitable expansion of drug cartels and the threat that they can seize power in Mexico”. Militarization of the fight against drug cartels has not given any promising results. The death toll of this “quiet war” reaches tens of thousands of people. Drones the US armed forces are using “to detect channels of drug smuggling from Mexico to the US” are a fearful symbol of the escalation of this war.

Washington is doing its best to prolong the occupation regime. In July 2012, the presidential elections will be held in Mexico. Political analysts forecast that after 12 years of staying in the opposition the Institutional revolutionary party (PRI), which used to dominate at the Mexican political arena for decades, may return to power. Governor Enrique Peña is regarded as the most probable presidential candidate from PRI. This is a 45 year old party leader with good reputation and the looks of a hero of Mexican soap operas.

The claims laid by his competitors against him - doubtful source of the funds spent on his image and election campaign. Millions of dollars are being spent on a respectable car, costumes and Cartier watch. How can the politician afford such a luxurious life style if he does not have his own business? But this is not a big deal when someone wants to appoint his inside man. That is why Washington prefers Peña Nieto. A preliminary “bride show” of Peña Nieto in the US began with his visit to the US Congress where the Mexican politician made a good impression on the congressmen. A number of “private” meetings with the representatives of influential agencies were held. Peña Nieto, “ future Mexican president”, as he was presented to the governmental officials, promised his conversation partners to strengthen the fight against drug cartels and terrorist groups, which pose threat to the US as well as to support Washington’s activities aimed at the limitation of the influence of the “populist” countries” and their return to “democratic values” within “non-confrontational” regional organizations. Peña Nieto made it clear to the US politicians that he is a “reliable alternative” to the threat of the revival of “the Mexican populism” represented by Andreas Manuel Lopez Obrador, the head of the national Revival Movement (Movimiento Regeneración Nacional - MRN).

The problem of Obrador is a serious concern for Washington. In 2006, this problem was resolved by means of the large-scale frame-up of the election results in favor of Calderon. In 2012, it will be much more difficult for Washington and Mexican oligarchs to “appoint their president”. That is why one year before the election an intensive promotion of Peña Nieto in mass media has already begun. He is being positioned as the all-national leader while Obrador is depicted as “secret supporter of Chavez”, a marginal politician, who is far from the needs of the Mexican people and is bound to fail. Meanwhile, it was Obrador who in the situation of the informational blockade was traveling across the country all these years after his “defeat”. He was meeting with his electorate and creating the MRN system and his political program as an alternative to the neo-liberal model aimed at helping Mexico to find the way out the permanent social and economic crisis.

“We reject any forms of the US’ interference, - repeats Obrador constantly – We do not want to be a foreign protectorate, a colony ruled by an alien government”. The politician opposes the course of the modern Mexican liberals on the military cooperation with the US and advocates for the priority of the trade and economic relations. “Instead of the Mérida initiative and the handover of weapons and helicopters to us, - Obrador says, - we offer the US government, if it really wants to help Mexico, to provide us loans without humiliating usurious interests. These funds will help us to live up the national economy to create working places and to form conditions for the reduction of immigration of our citizens to the US”.

Obrador rejects the current strategy of the “war against drug cartels”, used by Washington and Calderon’s government to justify the use of the Mexican and US troops on the territory of Mexico. This is the task of police and security agencies to fight drug mafia. That is why Obrador (if he wins the elections) promises to declare Calderon’s’ agreements with the US, which are humiliating for the national sovereignty and which establish de-facto Pentagon’s occupational regime, as invalid.

Many agreements of that kind were signed. Washington used political incapability of Calderon to achieve its geopolitical goals in Mexico, which is alongside with Colombia is regarded as a “bridgehead” to fight “populist” regimes of ALBA member-states. In fact Mexico now has parallel governing agencies headed by the US diplomats. They control thousands of “non-governmental organizations”, “volunteers” of the Peace Corps, contractors under different covers, the “fifth column” structures etc.

The Mérida initiative’s headquarters, which coordinates the war on drug trafficking and criminal groups, is located on Paseo de la Reforma 225 - not far from the US embassy. The representatives of US special services – DEA, CIA, FBI, the Bureau of alcohol, tobacco, firearms and explosives (ATF), immigration and customs control services are the bosses there. They carefully check their Mexican “partners” in order not to let the allies of Mexican drug lords and criminal gangs in the center of planning of joint operations. Of course, Americans do not inform their Mexican partners about all their operations. For example, one of them was carried out through ATF in the US. The “controlled supply” to Mexico of 2,000 AK-47 machine guns and sniper riffles for the purposes of fighting drug mafia failed. The responsible workers lost control over the biggest part of the supply. Observers note that arms are supplied to Mexico via different “controlled and uncontrolled” channels without meeting any special resistance from the US border guards and special agencies. Daily, Mexican clients receive up to 1,500-2,000 guns. The numbers of confiscated guns is much smaller but they have to produce something to report on their work …

US President Barack Obama is sending Earl Anthony Wayne as the new ambassador to Mexico. His mission is to ensure the victory of “the US candidate” at the coming presidential elections. Like many US diplomats Wayne has a serious military background. All this confirms the version that the US embassy is getting ready for working in critical circumstances. It should be noted that on the initiative of the Institutional revolutionary party (PRI) the agenda of the legislative and executive power includes the reform of the law on national security. The draft law envisages entrusting the president with additional authorities to stop constitutional guarantees and to use the army to suppress “street violence” (social protests).

Some political analysts think that the adoption of the law will be timed with Peña Nieto’s presidency. He will have to “push forward” numerous unpopular measures he promised to Washington, including the permission for the US armed forces to use the Mexican territory, waters and air space in their fights against potential enemies in the region. Is it necessary to name these enemies again?