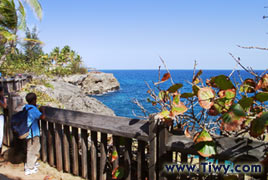 In recent years the Hollywood directors more and more often shoot their films «at nature» of Dominican republic, the shores of which are washed by blue waters of the Caribbean sea, and the skies of which are almost full of bright shining sun. Plus luxuriant tropical vegetation and the most important – low prices!

To shoot in Dominican republic – means to save a lot, and it appeals to any producer.

Puerto Rico a, Mexico and Costa Rica in this respect yielded to the shade, maybe, because the Dominican authorities treat alluring of the Hollywood masters as a real task of state importance.

Nowdays, the scenery of Santo-Domingo is used by Robert De Niro, who decided to shoot a film about the central intelligence agency of the USA, the first years of existence of this ominous organisation and its operations in the Caribbean countries during the years of the cold war.

Actor and director R. De Niro has just been treated kindly by the President of the Dominican republic Leonel Fernandez. The local papers wrote: ” American actor is treated as a real president”.

Fernandez is more than right attending to De Niro, who will definitely shoot a good film, and this is an excellent advertisement for his country, its tourist image, romantic colonial streets of the capital Santo-Domingo.

Even better advertising success is expected by Dominicana from the future blockbuster of Steven Spielberg - «Playa Giron». The film is about the CIA crazy attempt to land in 1961 the detachment of «contras» to the Cuban shores to overthrow the Fidel Castro regime.