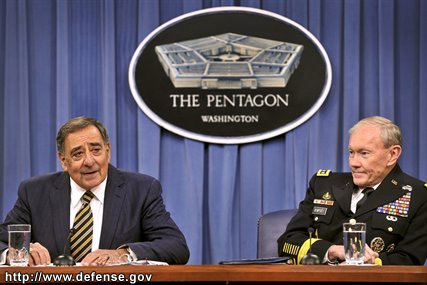 While UNASUR is gradually moving towards the creation of an autonomous regional security system, Washington's perspective on integration initiatives of such scale is well-known: the U.S. typically frowns on the projects unless it gets the controlling stake. It might seem surprising in the light of the above that the recent UNASUR moves in the security sphere received no hammering from Washington. Since one can hardly expect the Pentagon with its perpetual open and clandestine wars in Asia and Africa to lose interest in its own "backyard", there must be a profound explanation behind the unusual tolerance of the Empire which, in the majority of cases, is quick to punish defiance.

Apart from the routine anti-Iranian rhetoric, the Pentagon's chief Leon Panetta generously dispensed expressions of friendship and peace-loving during his recent Latin America tour, in which he visited Colombia, Brazil, and Chile. Predictably, Panetta talked about fighting against drug cartels and slammed Venezuela at media briefings, citing, in particular, the U.S. concerns over its rearmament assisted by Russia and China. Panetta's point - a fairly ridiculous one - was that the policy looked suspicious when pursued by a country facing no external threat. It is completely natural, though, that the U.S. wars for oil prompt the military buildup in Venezuela where the administration realizes that sooner or later the U.S. attack will follow. The range of themes touched upon by Panetta in the course of his first show in Latin America in the capacity of the U.S. Defense Secretary gives a reasonably good idea of the U.S. agenda in the region. For example, Panetta praised the anti-drug campaign launched by the U.S. jointly with the local government in the Columbia, where the interactions also included the struggle against leftist guerrilla groups. The former used to count up to 20,000 members at the peak of their activity, but at the moment the number hardly reaches 8,000. Panetta is convinced that the Plan Colombia, which cost Washington at least $8b, has proved remarkably efficient and pledged that the U.S.-Columbian cooperation would continue into the future even as the Pentagon's financial resources are shrinking. He confirmed that Columbia had bought 10 U.S. copters, five of them - Black Hawks. The U.S. will go on supplying arms to its top regional partner since Washington appreciates the role played by Columbia in the containment of populist regimes. In fact, Panetta touted the U.S.-Colombian military ties as exemplary and dropped a hint that building the same relationships with other Latin American countries is the Pentagon's short-term and long-term priority.

In Brazil, Panetta fully employed his Italian eloquence to lure the country's administration and top brass into a tightly knit alliance. Speaking to his colleagues at Brazil’s Superior War College in Rio de Janeiro, the U.S. Defense Secretary painted a picture of an ideal future, stressing the global importance of the country, saying things like "We support Brazil as a global leader, and seek closer defense cooperation, because we believe that a stronger and more globally engaged Brazil will help enhance international security", and expressing the view that stronger Brazil would mean stronger U.S.. In the past, the U.S. Administration refrained from showering the country with acclaim least the heightened self-esteem of its government grows into a problem for Washington, and the recognition of the Brazilian global status marked a definitive departure from the policy. This part of Panetta's address must have been heavily scrutinized and approved by the U.S. Department of State, and the recommendations issued by U.S. ambassador to Brazil Thomas Shannon were evidently taken into account. At home, Shannon enjoys the reputation of a top expert on whatever concerns Brazil, where his mission is to prevent the country from drifting towards the ALBA group and, above all, towards Venezuela. The rise of the interactions between Brazil and Venezuela in the military sphere is Washington's permanent headache. The Venezuelan policy before the advent of Chavez, which was largely dictated by the U.S., used to regard Brazil as the main enemy. Chavez did a huge job to befriend Brazil and to make it an ally in guarding Amazonia, fully aware that seizing it with a legend about internationalized control as disguise was an entrenched dream in Washington.

Panetta urged Brazilian government officials to prove their openness to dialog by penning the contract to buy 36 U.S.-made Super Hornet aircrafts, the deal total being $4-5b. He made it clear that the aircrafts are loaded with top-secret technologies which can be supplied exclusively to top-trusted partners, and that the park of Hornets would open to Brazil the entry into the club of the U.S. closest allies, but also sent the message that the opportunity must be seized fast while Washington is ready to go that far. In other words, Panetta maintained as a part of his marketing strategy that at the moment the deal is looked upon favorably in the White House and the Congress but the tide may eventually change.

Brazil, however, stays undecided as there are alternative options on the table. Other bidders are France with Rafale fighters from Dassault Aviation and Sweden with Grippen air crafts from Saab. There is discontent in Brazil that its contract to sell the Embraer light air crafts to Afghanistan worth $380m was scrapped under U.S. pressure, and the list of similar grievances is fairly long. For instance, Embraer's big contract with Venezuela went under as some of the components for the Super Tornado air crafts to be supplied hailed from the U.S. which, under the pretext, was able to block the sale.

As required by the tour blueprint, Panetta delivered an accolade to Chile's experience in providing assistance under the conditions of natural disaster, stressing that "Chile’s critical lessons learned must be shared with the rest of the hemisphere". The U.S. Defense Secretary further stated in Latin America that the U.S. would no longer resist the efforts of the region's countries to cultivate their military potentials and that Washington has far-reaching plans for “innovative alliances” with its partners. “We are both Pacific nations”, said Panetta in Chile, adding that the security and prosperity of both nations depends on the Asia Pacific region. The signal was easily readable – for the US, the country is becoming instrumental in maintaining control over Asia Pacific where the Chinese presence is becoming increasingly visible. Currently, China is ahead of the US in trade with Brazil, Chile, and Peru, and the trend is about to span Argentina and Columbia.

The U.S. is strengthening its network of military bases in Asia Pacific in anticipation of China's making deeper inroads into the region. A new base on which the U.S. Southern Command spent around $500m recently opened in Chile's Concon. The real purpose of the facility is hitherto undeclared while the official myth that it is going to be used to train Latin American peacekeepers under the UN auspices cannot be taken seriously – so far, Chilean parliamentary commission which subjected the compound to an inspection mostly found it populated by U.S. servicemen.

In every Latin American country he visited, Panetta called for “stronger mechanisms of regional security cooperation”. Considering that UNASUR and its defense council are trying to build those independently, one was left with an impression that the whole tour was a subversive operation meant to incite divisions within the alliance. Chavez bluntly said that the UNASUR jump to unity over the common defensive doctrine was inspired by the Libyan and other dramas provoked by U.S. interventions. Indeed, there are absolutely no reasons to believe that the Libyan scenario will not some day materialize in Latin America. At a joint media event Chile's defense minister Andrés Allamand did voice hope that the epoch of interventions in the Western Hemisphere was over, but failed to even mention whose interventions he had in mind. That being an open secret, Mr. Panetta kept smiling enigmatically while listening to his Chilean counterpart. Panetta plans to throw in specific regional security proposals at the conference of defense ministers due to open in the Uruguayan capital of Montevideo in October. Uruguay's deputy defense chief Jorge Menendez told in an interview that the UNASUR countries would stick to a coordinated position at the forum. The rifts between them and the Central and North American countries — over the viability of the Inter-American defense council and the adequacy of the 1947 mutual assistance pact - are already in sight. Menendez sees both as Cold War legacy that did not help even when it should have, as in the days of the Falklands War.

Obviously, UNASUR is going to be highly critical of whatever Panetta offers in Montevideo — the ranks of those who are naive enough to embrace «continental solidarity» with the Empire are rapidly melting.