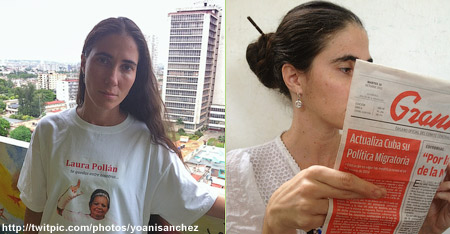 All Western agencies joined together reporting the news that Yoani María Sánchez Cordero, a 37 years old Cuban blogger, got a permission to leave Cuba. She had tried to get the permission for five years, now she got it. Sánchez was kind of frustrated that her leaving was far from being an event in the focus of public attention. No dramatic actions: no interrogations, no searches, there was nothing to be used for denigration of the «Castro brothers regime».

Yoanni’s 80 days trip is to include ten states, including Spain, Switzerland, Germany, Italy and the United States. Brazil was the country to start… The first appearance there was a failure: a group of left-wing protesters demonstrated against the screening of a libelous documentary entitled «Cuba-Honduras Connection», devoted to curbing the freedom of speech in the countries ruled by «dictatorial regimes». Yoani Sánchez plays a part. She is the one to tell about the fight for democracy in Cuba, the use of social networks for uniting the young people. She has an aversion for life in Cuba and dreams about «genuine democracy for all».

The blogger was frustrated over the fact the «Advocates of Castro brothers regime in Brazil» disrupted the screening. She called on the government of Dilma Rousseff to take a «more energetic» and «tougher» position to address the issue of human rights with the government of Raúl Castro. According to her, «There is a lack of toughness or frankness when talking about the subject of human rights on the island. There has been too much silence. The people do not forget». Her guard was reinforced after the first incident. Some media outlets reported Habana was ready to go to any length in order to get the blogger’s tour disrupted. Brazilian Foreign Minister Patriota denied the rumors. He said there were no obstacles on the way of the visit. Yoani stopped at the most fashionable hotels reputed as the most safe ones for US citizens. Her stay was at the expense (hosting courtesy) of Brazilian Hotel Association.

The fame Yoani gained thanks to social networks is a matter of special attention. How could a hardly out of the ordinary blogger critical of Habana’s communal services and transport problems become a key figure in the propaganda campaigns launched by the US State Department and the CIA in Cuba? She emigrated to Switzerland in 2002 after a fictitious marriage. Probably then the US special services laid eyes on her as a promising influence agent. There are many Latin Americans living on Switzerland and the CIA has always been well connected and strongly positioned there. She had all the makings for the job. Graduated in philology, she was full of ambitions and had a special aptitude for analysis and improvisation. The blogger tried to compensate her lack of physical attractiveness by intellectual prowess, achievements in politics and journalism. The CIA operatives used it all to their advantage, promising her a «smooth career path», international fame and protection from «repressions» on the part of Cuban government. 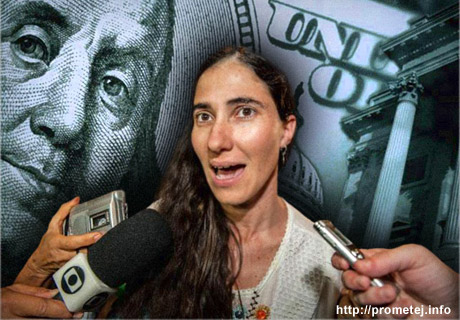 She became computer savvy in Switzerland and got introduced to programming and other skills. The training was useful afterwards. She told that on a number of occasions that she pretended to be a German tourist to get access to Internet connections in the hotels destined for foreigners. Not once she disguised beyond recognition to get necessary information at party gatherings. The blogger was master of disappearing when being watched and followed so that she could meet her connection from the United States Interests Mission in Havana. But it’s not always she used the art of conspiracy for working meetings with Americans. Many a time she met them in broad daylight in her apartment: kind of «I have nothing to hide and do it all openly» behavior.

Sanchez got back to Cuba in the summer of 2004. In April 2007 she launched the Generation Y blog full of blunt reflections on Cuban life. From the start it was mainly destined for young people. Yoani positioned herself as a young Cuban mulling over the issues of right and wrong in the conditions of «tough life». She said in an interview once that she had «a lot of issues and stories never discussed in press or on television. It was all strongly mixed up with skepticism…, the blog made it possible to get rid of many demons: apathy, fear, inertness. The blog therapy found its way to many hearts captured by the same demons».

The State Department and the CIA did their best to promote the blog in the shortest time possible. The blogger’s posts were translated into twenty languages. The texts were accumulated together, sorted according to the issues and then made public as books. There were four bulky volumes published in 2010-2011.

The number of issues encompassed has grown as time went by. The state of Cuban economy, public sentiments, rumors about possible changes at the top – the blog was referred to as the most reliable information source by Western media. The Huffington Post, the Miami Herald, the New York Times, Spanish El Pais and Argentinian Clarin began to cooperate with her. A flow of prestigious international awards followed. In April 2008 she won the Ortega y Gasset journalism prize from the Spanish daily El País. In a short period of time she received around twenty awards totally equal to over $250 thousand. US Time lost no time in inserting her name into an annual list of the 100 most influential people of the planet, Foreign Policy called her one of the ten leading Latin American intellectuals.

The US Habana Mission reports made public by WikiLeaks, mention promising young «non-traditional dissidents», like Yoani Sánchez, who are able to influence the Cuban social and political life after the Castro brothers are gone. That’s what explains why President Obama pays such attention on what Sánchez does. In 2007 he responded to seven questions of the blogger. That’s what it looked like in practice. The US Mission got the questions and made answers in the name of President. Then they sent it to Washington for the approval by State Department and the White House. After that the document went back to the Mission and re-sent to Sánchez.

In 2011 Sanchez received the US Secretary of State’s International Women of Courage Award. Michelle Obama and Hillary Clinton took part in the ceremony. According to her, no matter the persecution by Cuban authorities Sanchez was going her own way telling the things that could not be told by others.

In 2012 the blogger was nominated for the Nobel Peace Prize by Spanish Union, Progress and Democracy (Spanish: Unión Progreso y Democracia) party. The prize went to the European Union. No doubt she’ll be nominated again. Her chances will go up in case of repressions on the part of the government. But the Cuban leadership is reserved even in view of intermittent information war waged against it by the blogger. Does she have support on the Island? Not much. The Cubans know well the examples of other countries that refused socialism.