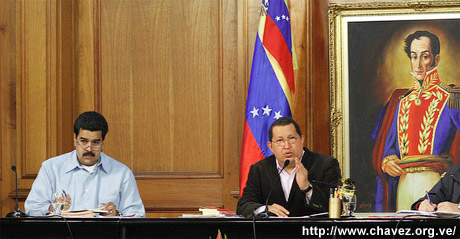 Vice President Nicolas Maduro has warned the opposition a number of times recently that any attempts to stage a coup d’état in the country were inadmissible. That’s how the Bolivarian leadership reacted to the visit of opposition presidential candidate Henrique Capriles Radonsky to the United States. He lost the October 2012 presidential elections to Hugo Chavez, but never put up with the results. Neither did the outside forces that offer him their support. The empire of United States and world Zionism are intent to make Capriles continue serving their interests. They think the time is right for power change in Venezuela. The prolonged illness of the President is to be used as a pretext to change the tide of events in violation of the Constitution and the people’s will.

Nicholas Maduro has strictly defined the phases of Capriles’ conspiracy activities. First Radonsky went to Columbia to meet business people and discuss cooperation and the ways to boost smuggling of foodstuffs and first-need commodities from Venezuela – the usual agenda for the one who is planning economic subversion. He also discussed the issue of financing Columbia’s para-military formations to use them on Venezuelan soil. According to Maduro, their leaders were consulted on future interaction. In Miami Capriles had contacts with Venezuelan bankers who had fled the country to avert arrests. Some of them were accused of subversion, for instance, the involvement into the murder of prosecutor Danilo Anderson, who investigated the bankers participation in the April 2002 conspiracy to kill President Chavez. The both sides came to accord and the bankers said they would render financial aid to the radical opposition in Venezuela. Maduro said Capriles held talks with an influential «Miami mafia clan» (he probably meant Cuban immigrants) and the representatives of Otto Reich, former US Ambassador to Venezuela, then US President's Special Envoy for the Western Hemisphere; Assistant Secretary of State for Western Hemisphere Affairs, who nowadays works for the CIA and is involved in propaganda campaigns against Venezuela and other «populist regimes».

In New York Capriles was to meet some US Republicans and Roberta S. Jacobson, incumbent Assistant Secretary of State for Western Hemisphere Affairs. The special services were involved in the talks too. Maduro said the government was attentively monitoring all Radonsky moves on the US soil. Mario Silva, a Venezuelan journalist and political activist, and host of the television program, reported the leaders of the Democratic Unity Roundtable (Spanish: Mesa de la Unidad Democrática, MUD) – Ramon Jose Medina and Andres Borjes, a member of parliament and an active participant of the April 2002 coup attempt, accompanied Capriles on his US trip. Obviously, the Venezuelan opposition emissaries coordinate their destabilization activities with the United States.

The acts of sabotage have been renewed in Venezuela. Hundreds of tons of foodstuffs are taken out of the country. Some food is taken by entrepreneurs to clandestine storages, some transported to neighboring countries, and some is doomed to rot. Electricity lines and substations are subject to subversive actions. Water supplies are regularly interrupted. Street violence, especially in workers districts, is on the rise. It’s not as spread as in Mexico, Central America, Columbia and Peru, still Venezuela has the reputation of a leading criminal state in Western Hemisphere, including drug trafficking and «human commodity».

The hopes are pinned on inciting chaos… The new generation of students is the primary target for propaganda efforts. They block the streets, stage manifestations and demand the government tell them the whole truth about the President’s state of health. The opposition students (coming from well-to-do families as a rule) are involved in anti-government propaganda efforts and spreading rumors with the help of social networks. They say Chavez is doomed. This disinformation is spread around inside and outside Venezuela. The concoctions of Guillermo Cochez, former Panama Ambassador to the Organization of American States, asserting that Chavez is switched off his life support, are widely disseminated. Spanish ABC newspaper gets financial donations from the CIA for spreading made-to-order stories, as a rule including fakes about Chavez. Colombian radio Caracol enjoys a special place in the efforts. Venezuelan youth rebel magazine CETA’s front page showed the photo of Chavez with closed eyes saying he was dead.

Nicolas Maduro and his team know the propaganda is exerting negative influence. During the whole period of Chavez illness the government officials have provided regular updates about what was going on in quite a detail. In June 2011 he was subject to pelvic abscess surgery in Havana, then it was swelling bowel decease. By the end of February 2012 Chavez went through surgery again. In November the same year he was going through a recuperation period in Cuba using pressure chamber for the purpose. He found out the fourth surgery was required. After that the Western media started to spread around fakes saying the President was a Cuban hostage and Maduro was to usurp the power in Venezuela.

Chavez insisted on return to ease tensions. He was transferred to Caracas and placed in Carlos Arvelo military hospital. The recuperation is on, but regular state of health reports are not enough to placate the opposition. They want to see with their own eyes the president is really alive and able to adequately react to reality. In fact it means the opposition is intent to convert the territory around the hospital into an epicenter of confrontation with the authorities. Diosdado Cabello, the President of National Assembly, warned against such actions threatening to come with a rapid and resolute response.

The Chavez recuperation is a hard and slow process. That’s why his next of kin are against making public any photos showing the national leader being helpless. Operations and chemotherapy couldn’t’t go without leaving a trace. Right now Chavez cannot address the people by radio because of breath problems, being intubated he cannot freely speak. A mixed team of medical specialists from Cuba and Venezuela do their best to make him rest. Only the next of kin and a narrow group of Bolivarian leaders have access to him. Even the presidents of Ecuador and Bolivia Rafaello Correa and Evo Morales have been refused a chance to see him. "There are days when his health situation is very difficult, according to the information from his ministers, but now he has returned to Caracas and that is a great relief," Mr. Morales said. "Sometimes disease and illness are difficult to fight, but of course we hope that we will be together soon to be able to continue working together as we have done up to now," added the Bolivian president.

Communication and Information minister Ernesto Villegas announced the creation of the Communication and Information Bolivarian System to fight the psychological attacks launched by United States agencies. He stressed the System is to neutralize the systematic efforts of hostile forces to hush up the information about the government activities. The whole country is to be encompassed by its broadcasting. Local government (comunas) and Bolivarian activists media is to join in along with state radio, TV and press outlets. It will become a means to counter pro-US propaganda efforts. Until now, opposition TV channels and radio stations have dominated the broadcasting space. The same way it has been with press outlets. Now the time is ripe to change the trend. It’s a matter of months, not years. 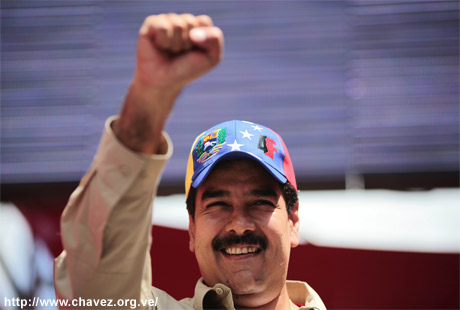 As the possibility of Chavez returning to the helm is fading, acting president Maduro is increasingly coming under harsh criticism from the pro-US media. But he got needed political experience during the years he worked with Chavez. He also enjoys solid international reputation as the country’s foreign chief. Maduro knows how to take well balanced decisions and stand firm if need be. In case he becomes the President of Venezuela, he will strictly adhere to the policy initiated by Chavez. 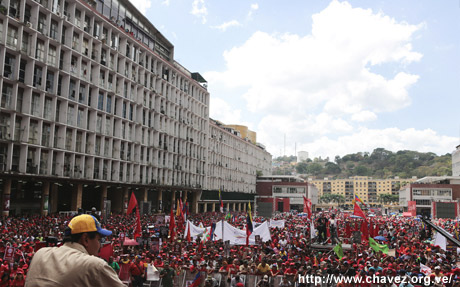