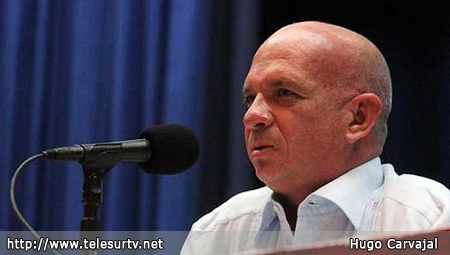 The United States has started to avoid the burden of looking for evidence in case it wants to accuse someone of criminal activities. In recent years the US has become accustomed to ignore legal responsibility. The pretext of fighting terrorists has been used to allow detaining «potential criminals», putting them into secret jails and using cruel torture to get confession. The whole US security system has been affected. The leaders of American special services have got accumulated the experience of detaining (legally or not) people abroad and bringing them into the United States to make face trial. But there are failures suffered on the way and lessons to be learnt…

Aruba, which is part of the Kingdom of the Netherlands, is located 27km (17 miles) north of Venezuela. Top Venezuelan official Gen Hugo Carvajal was detained at Aruba airport on July 24 upon his arrival. Reinforced police detachment accompanied him to jail letting know the action was undertaken upon the extradition request that had come from the United States.

The island’s Dutch authorities were notified in February that Carvajal was assigned by Venezuela to become its consular general in Aruba. There was plenty of time to inform his assignment as unacceptable if that was the case. Then no conflict would have taken place.

Carvajal was close with former Venezuelan President Hugo Chavez. They had gone through military service together and shared a lot of common ideas. Chavez knew he could count on his brother-in-arms in a pinch. Carvajal was the head of Venezuelan military intelligence in 2004-2009; he countered the activities of the US Drug Enforcement Administration, the Central Intelligence Agency, US military intelligence, including the National Security Agency. He never let the conflict with Colombia spread inside the Venezuelan territory. He always had information to prevent the adversary’s actions. The ultra-right para-military groups were effectively beaten back suffering great losses when they tried to cross inside the Venezuelan territory. He also effectively fought the drug dealers often acting under the control of US Drug Enforcement Administration. As a result of Carvajal’s efforts, the Drug Enforcement Administration was forbidden to operate in Venezuela. It brought about large-scale orchestrated campaign to denigrate the General and use black propaganda methods to make him look like a Venezuelan drug baron.

Reading the media used by US special services for propaganda efforts in Latin America and the Caribbean one can understand what the Venezuelan enemies wanted Carvajal to be arrested for. They planned a deal with the US justice: to mitigate the sentence he was to cooperate on all charges giving evidence against Chavez, Maduro and other Bolivarian leaders. A US team came to Aruba with a package of proposals and guarantees. According to Venezuelan official sources, the US intelligence in Willemstad (the island of Curacao) had conducted some activities aimed at detaining and isolating Carvajal. The Willemstad station area of responsibility includes Aruba and Bonaire. The main target for recruitment are Venezuelans. These islands are also used for arranging the meetings with Venezuelan opposition activists, involved in conspiracy activities aimed at toppling the Maduro government. 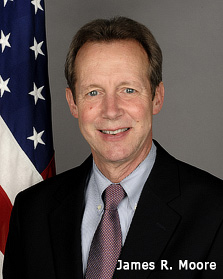 The Curacao residence has good reputation. It is headed by James R. Moore, the US consul general with the thirty years of diplomatic work and intelligence activities behind. The leading intelligence officials are Solmaz Sharifi, chief of Political and Economic Section, DEA section chief J. Gregory Garza, Head of Information Management/Programs Office Jeffrey Yacobucci etc.

This station is responsible for getting Carvajal detained. They started to put pressure on him so that he would ask for political asylum. He was promised to be immediately flown to Miami in case he agrees to cooperate. At the same time they made a fake go around in media saying Carvajal had a passport with another name and showed his real identification document only after being detained by police. Media said he had 20 thousand dollars in the luggage (no doubt the money belonged to the Ministry of Foreign Affairs of Venezuela and was destined for embassy and consulate needs). There was another invented story made go around in Caracas saying that a few recent months he had been secretly discussing the details of escape to the United States.

Carvajal did not cede to blackmail and demanded to give him an opportunity to meet Venezuelan officials. Calixto Ortega, Venezuelan deputy chancellor for Europe, immediately went to the island to solve the situation and prevent the acts of coercion to make Carvajal go to the United States (as often practiced by the Central Intelligence Agency). 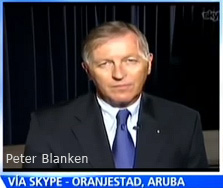 Peter Blanken, chief prosecutor in Aruba, who had relation to the Carvajal’s detention and who at first danced to the tune of US Central Intelligence Agency, decided to call his superiors in the Netherlands. At first he was told the Venezuelan had no diplomatic immunity. Then he was explained that the Venezuelan Ministry of Foreign Affairs got the necessary permission in February and the diplomatic immunity status was in force. The US representatives made vibrant attempts to exert pressure on Aruba authorities to let Carvajal be taken to Miami. A campaign in support of the Venezuelan diplomat was started in the islands. Venezuela is an old friend of Curacao and Aruba, the tourists from Venezuela are an important source of income, and Caracas had sent signals it was going to react in case of unfriendly actions. 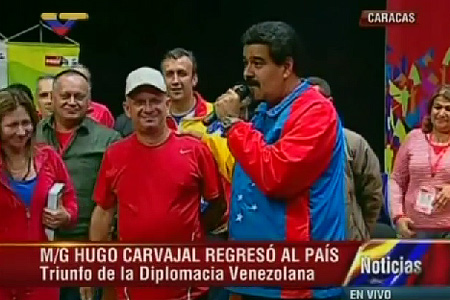 President Nicolas Maduro said that the Carvajal case was a special operation conducted by the United States to blackmail and intimidate the top military leadership of Venezuela. Either reject your principles and join the anti-government conspiracy, or we’ll charge you and make face the Empire’s kangaroo trials on trumped-up charges. The Carvajal case was provoked to show how it is done in practice, there were threats voiced against Rangel Silva and Rodriguez Chacin.

Meanwhile, Roberta Jacobson, assistant secretary of state for Western Hemisphere Affairs, said via Twitter that the liberation of Carvajal was a misapplication and a mockery of the immunity principle. The US State Department affirmed Aruba, the Netherlands and some other countries were threatened by Venezuela to make them free Carvajal. «We are also disturbed by credible reports that have come to us indicating the Venezuelan Government threatened the governments of Aruba, the Netherlands, and others to obtain this result. This is not the way law-enforcement matters should be handled, and we will certainly continue our efforts to bring him to justice,» said US State Department spokesman Jen Psaki on July 28 at the daily press briefing.

The imperturbability of Washington playing the role of world order protector may only make people laugh their heads off.

Washington has not refused the idea to pursue Carvajal and other Venezuelan politicians fallen out of US favor. Some media outlets spread around «official documents» accusing Venezuelan military and security services of cooperating with FARC (The Revolutionary Armed Forces of Colombia—People's Army (Spanish: Fuerzas Armadas Revolucionarias de Colombia—Ejército del Pueblo, FARC–EP and FARC) providing the group with sanctuaries on the Venezuelan territory. To corroborate the affirmations they use the evidence provided by deserters, double agents and fishy personalities trying to make a buck. The information concocted by US special services is not of great quality (the reports on Ukraine is an example). Hugo Chavez and Nicolas Maduro never tried to hide the fact that there is fighting going on from time to time, but not with guerilla movement fighters. Venezuelans fought ultra-right groups which coordinated their activities with drug dealers. True there were sporadic skirmishes with the guerillas; especially at the time Chavez tried to start a dialogue between the belligerents.

The Carvajal case showed once more that US special services use dirty tricks operating abroad. The strategic goal is global dominance; other things are of no importance.