A Showdown in Venezuela 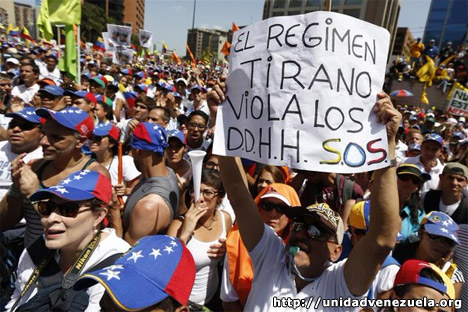 In order to understand the current plight of Venezuela, one has to go back to the parliamentary elections of Dec. 6, 2015. For the first time, the base of President Nicolás Maduro’s support, the United Socialist Party of Venezuela (PSUV), took a beating.

Supporters of the Bolivarian regime won 55 seats in the legislature. The opposition bloc, the Democratic Unity Roundtable (MUD), won 109 out of 167 seats, plus another three that were awarded to representatives from Indian organizations who are also members of the opposition coalition.

Their opponents were euphoric over the Bolivarians’ misfortune: it seemed as though the «hated regime» was on the verge of collapse. The leaders of the opposition were sure that Maduro’s government would be gone within six months at most. But those predictions did not come true. President Maduro, as well as the politicians loyal to him who were schooled by Hugo Chávez, are holding the line.

The confrontation between the executive branch (which is in the hands of the PSUV) and the parliament (which is dominated by the opposition) has reached a fever pitch. In addition, the opposition is simultaneously pursuing two plans of action.

The leaders of MUD decided to exercise their constitutional right to stage a referendum to recall the current president, Nicolás Maduro. Activists have begun to collect voters’ signatures in order to launch the recall proceedings against the head of the government. The National Electoral Council has given them its official permission to do so. The country’s constitution only allows legislators to request such a referendum if the president has already been in office for half of his elected term. This type of referendum was the brainchild of Hugo Chávez, and he himself survived a recall vote in August 2004. Maduro was elected president in 2013, and thus there are no roadblocks to conducting the procedure. 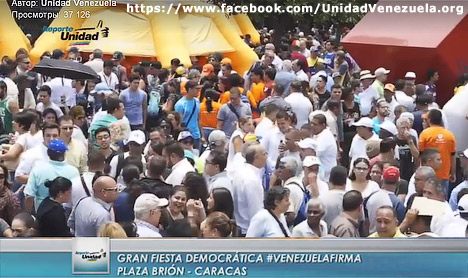 A total of 195,000 signatures are required, which represents 1% of the electorate. According to televised news reports from Venezuela, the opposition will have no trouble collecting «yes» votes. The next step will be to convince 20% of the voters – or approximately four million Venezuelans – to agree to a referendum. But the opposition is unlikely to have many problems at that stage either. The rhetoric used by the leaders of MUD to mobilize their supporters is quite tame – regime change is their rallying cry. They claim to favor a peaceful option, without confrontation, street clashes, roadblocks, or attacks on government officials. However, a glance back into the past suggests that compromise in Venezuela is quite elusive.

Every day the news headlines report acts of sabotage intended to compromise the Maduro government. There is increasing talk about the opposition’s «hidden agenda»: to spark a social explosion and use paramilitaries and criminals to commit murder, as happened in Caracas and other major Venezuelan cities in 2014.

The country is engulfed in a socioeconomic and political crisis and the Bolivarian government’s efforts at stabilization are not doing the trick. The Bolivarian deputies find themselves in the minority in parliament, and so Maduro and his supporters are trying to rally the citizens’ assemblies that were established when Chávez was alive. These cells of «grassroots democracy» can stand up to the opposition parliament, which President Maduro has rightfully called the epicenter of subversive activity. Conditions in the country have become noticeably more difficult because of the shortage of electricity, the primary source of which is the Guri power plant that is operating at minimum capacity. Its reservoir is quickly drying up because of a long-standing drought (due to the El Niño effect, which is when temperature fluctuations on the surface of the water in the equatorial Pacific have a powerful impact on the environment). As of April 25, four-hour rolling power blackouts were imposed throughout the country. To save electricity, businesses and public-sector institutions will only be open on Tuesdays and Mondays for the next two weeks.

Diosdado Cabello, a deputy in parliament, has mentioned the conspirators’ plans to overthrow President Nicolás Maduro on his weekly television program. He has said that Venezuelan counterintelligence has documented the conspirators’ repeated attempts to draw the military into criminal activities. He claims that the US-based coordinator of the conspiracy is the former Venezuelan minister of water transportation, Major General Hebert García Plaza. He served as deputy minister of defense for a period of time and had access to classified data. García Plaza handed over all of this information to US intelligence services. His duplicity did enormous damage to Venezuela’s national security.

An organization led by Moris Beracha and a group of journalists (among whom Rafael Poleo, Emili J. Blasco, and Antonio de la Cruz are well-known for their radical sentiments) directs organizational activities and propaganda outreach from the US. That crew devises the main talking points for the anti-government propaganda. Those messages are picked up by the Venezuelan media, which is 90% under the control of the conspirators. This daily brainwashing of the average Venezuelan has had negative repercussions. The clichéd view that the Bolivarian politicians are incapable of handling the problems that are besieging the country from all sides is widespread among the Venezuelan public. The objective circumstances that have provoked the crisis are ignored, including the drop in the oil prices that are the main source of hard-currency revenues.

Television journalist Mario Silva, who monitors the actions of the radical opposition, emphasizes that that group has not the least intention of holding an honest dialog or compromising with the Bolivarian regime. The opposition arranges for power plants to be vandalized, ransacks public offices, sets fire to public transportation, and shuts down roads during rush hour. They have protested water outages and shortages of food and other basic consumer goods. «Selective killings» are cranking up, in which the victims are representatives of the Bolivarian government – politicians, mayors, police officers, and soldiers. 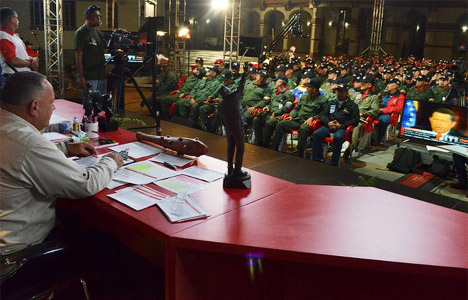 According to Diosdado Cabello, a former chairman of the Venezuelan National Assembly, a speech by the enemies of the Bolivarian regime is scheduled for May 15th. «Spontaneous» outbursts of unrest should occur simultaneously in different cities. Washington will present President Maduro with ultimatums, justifying its own interference in Venezuela’s internal affairs by citing the «threat that the conflict will spread to neighboring countries». The Organization of American States (OAS) will be used as cover for the subversive operations. Venezuelan leaders have no doubt that the secretary general of the organization, Luis Almagro, is involved in the conspiracy, as his regular meetings with opposition representatives are well known. 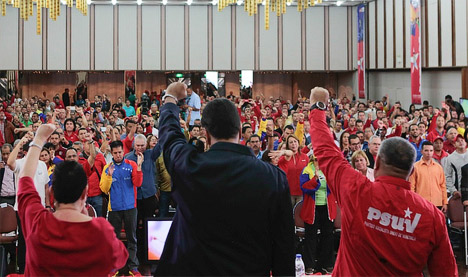 This is a tough situation for Venezuela’s political leaders, but all is not lost. In the search for a way out of this power crisis, one can turn to the ideological legacy of Hugo Chávez, in particular, to his campaign to correct errors – his «Three R’s» campaign: Revise, Rectify, and Re-motivate (Revisión, Rectificación y Reimpulso). Bolivarians are no stranger to pressure from either the domestic opposition or the US. Although it should be noted that the US embassy in Caracas has not recently used events in Venezuela as an excuse for toxic commentary: President Maduro is known to react harshly to any American attempts to interfere in the internal affairs of his country, and there is a long list of US diplomats who have been booted from Caracas.

Venezuela’s authority as a continental leader in the struggle for independence and national sovereignty has not diminished. And most important, many responsible posts in the country are held by a new generation of young people who were reared on the ideals of social justice, opposition to the «US empire», and a distaste for the neo-liberal economic model. 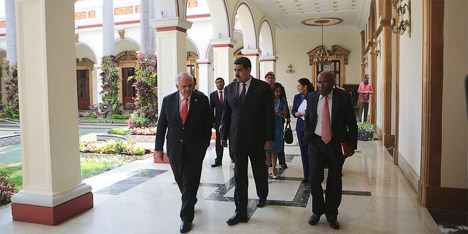 «Socialism with a Venezuelan Face» is still relevant. President Maduro has said that he intends to lead the country until the end of his six-year presidential term: «Nothing the opposition is doing is politically viable. I will be here [at Palace Miraflores] until 2018 at least».