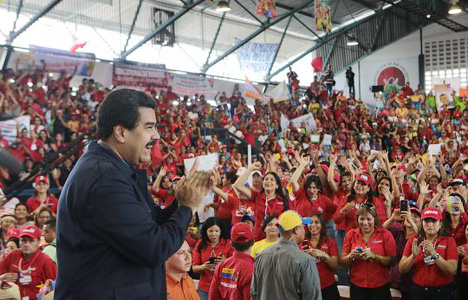 The US special services together with their “assistants” from Canada and Great Britain tried again to stage a coup in Venezuela. In the middle of February, Venezuelan President Nicolas Maduro said the national security services frustrated the plans of US embassy and put an end to its hostile actions. As a result, a number of people were arrested, including Venezuelan air force officers and activists of radical opposition. The subversive activities were guided by Western diplomatic missions. The names of those behind the plot are known but they cannot be brought to justice being protected by diplomatic immunity. The President said the plotters wanted to assassinate him. The United States embassy guaranteed that the perpetrators would be granted asylum in America.

The Bolivarian National Intelligence Service (El Servicio Bolivariano de Inteligencia Nacional – SEBIN) had been warned about the conspiracy preparations. A Super Tucano aircraft (a light, highly agile Brazilian aircraft designed principally for pilot training and counterinsurgency operations) used before for special operations by Academi (former Blackwater), an American private military company, was handed over to plotters in the United States. The plane had the insignia of Venezuelan air force. It was armed and prepared to make a flight from Colombia to the island of Curacao where a US forward operating location is stationed. The CIA-recruited pilots, who betrayed the Bolivarian regime and their home country, learned well which targets they had to strike: the presidential palace, the buildings of ministries of Defense and General Staff and TV company TeleSUR.

Security agencies found caches of arms, the equipment to provide guidance to the target and a video footage showing air force officers and opposition leaders involved in the plot addressing people. The video footage was given in Miami to journalist Patricia Poleo, a fierce opponent of the current Venezuelan government. She was to make it go on air but the plan was thwarted. The video material got into the hands of SEBIN operatives.

The video showed the plotters with balaclavas on their heads announcing the beginning of insurgency in the armed forces and the establishment of interim government. It was prepared to be made public by El Nacional newspaper at the time of coup. Three key figures of the Venezuelan opposition – Leopoldo López, the mayor of Caracas, Antonio Ledezma, the leader of Voluntad Popular (People's Will) and former member of parliament Maria Corina Machado signed and distributed a joint communique on February 11, just one day before the planned coup plot that President Nicolas Maduro denounced was to take place. 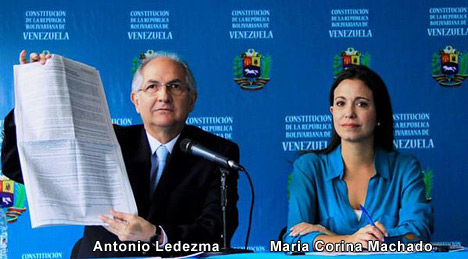 All these people were known to be close to the United States. Entitled “The Call for a National Transition Agreement,” the statement calls for unification of Venezuelans behind a national plan aimed at supplanting the current socialist administration of President Nicolas Maduro. It says the country was going through hardships unparalleled in its history. It is the fault of regime that has been trying for sixteen years to impose a failed system. In the text the current government is described as a “failed” “corrupt” and “inefficient” regime, made up of an “elite of no more 100 people” who have pilfered public funds “which could have been used for the benefit of all”. It also states that Venezuela is on the brink of a “humanitarian crisis” whilst the Maduro government is “delegitimised” and in its “terminal phase”. 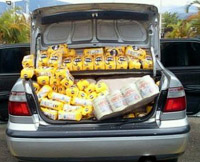 It says nothing about the hard struggle against the United States trying to overthrow the regime fallen out of its favor. In the effort to achieve the goal, the US uses all any methods without hesitation, including economic sabotage, subversive activities against oil and energy sectors, never ending information war, organizing street protests in big cities and the use of local criminals and Colombian paramilitaries to destabilize the situation in the country. The list also includes artificially created shortages of food and basic consumer goods. The operations against Salvador Allende in Chile come to mind. The US uses the same dirty methods in Venezuela. 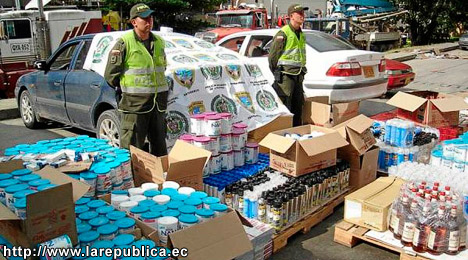 Waiting in line has become a common occurrence in Venezuelan cities since 2013. Different prices in Colombian and Venezuelan shops are one of the reasons. Almost everything is smuggled to Colombia – from super cheap gas to corn meal and sugar. To some extent the military called by President Maduro to fight the cross border smuggling helped to control the situation. 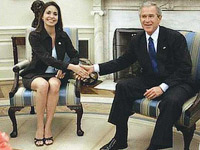 According to the plotters’ plans, Maria Corina Machado was to head the new government. She has been patronized by former US President George Bush Jr. The Machado’s three minute meeting in the White House with the President of the United States in March 2005 attracted unusually high attention of pro-US media. Maria was painted as the most promising politician able to defeat President Hugo Chavez and become a Venezuelan President absolutely loyal to the United States. The revelations about the Machado’s ties with US intelligence services spoiled the plans. She was the founder, former vice president, and former president of the Venezuelan volunteer civil organization Sumate that used US-provided funds. When it was revealed that Machado got large sums of money from special services, she had to keep away from spotlight. Today the United States needs her again. She is ready to go to any length in an effort to overthrow Nicolas Maduro. Washington wants her to lead the country. 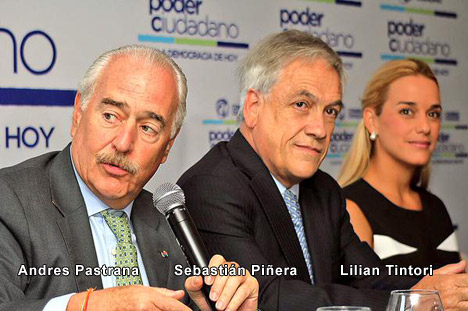 The planning has been done. A group of pro-US Latin American presidents is carrying out the mission. Former Mexican President Felipe Calderón, former Chilean President Sebastián Piñera and former Colombia President Andres Pastrana came to the country under the pretext of expressing their support for Leopoldo López. The real purpose was to see the real situation in the country. Nicolas Maduro never stood in their way. He only said that these people came to support ultra-right wing radicals who do not recognize the government and call for a bloody coup. Maduro warned that the visitors would have their hands soaked in blood if they hobnob with this kind of people.

Of those who signed the statement Machado is the only one who is still at large. A year ago Leopoldo López was put behind bars for inciting street protests resulting in dozens of victims. Antonio Ledezma was detained a few days ago charged with involvement in coup attempt. The conditions of detainment are not so tough; he can continue the struggle against the Bolivarian regime. Recently he sent a letter to media outlets calling for continuing protests and peaceful struggle against Nicolas Maduro to make the current President resign. In the letter he stuck rigidly to the constitution. It says "We must keep up the struggle in the street, in a civil manner with the constitution in our hands and with the truth in front of us" Ledezma wrote. "They [the government] have the weapons but we have the ideas to unite the Venezuelan people. Violence is a pointless vacuum that leads nowhere." He wants no mercy and calls for solidarity to protect democratic values in Venezuela. He stands out among Venezuelan politicians for his aggressive style and vindictiveness. It is suggested that if the plotters won, he would have headed the Interior Ministry to cleanse the national politics from Bolivarians, Chavistas and other elements hostile to the United States.

After the leading plotters were arrested and their ties with special services and embassies of the United States, Canada and Great Britain were revealed, Nicolas Maduro could say with certainty that another coup attempt orchestrated by Washington was effectively foiled. The tension in the relationship with the United States remains. In December 2014, President Obama endorsed sanctions against top officials of Venezuela accused by Washington of human rights violations. Maduro warned Americans that arbitrary sanctions and other attempts to exert pressure would deteriorate the bilateral relationship even further. He said the United States tried to stage coups in Venezuela a number of times. The US interference into the internal affairs of other countries has become a constant factor to negatively affect the situation in the world. 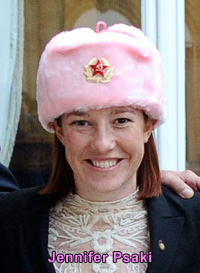 Jen Psaki, the spokesperson for the United States Department of State, as usually rejected all the accusations of US involvement into the conspiracy to organize a coup in Venezuela. “Well, I think we’ve seen continued accusations, no question, that are false and baseless. And our view continues to be that political transitions must be democratic, constitutional, peaceful, and legal. We do not support a political transition in Venezuela by non-constitutional means. We’re not promoting unrest in Venezuela, nor are we attempting to undermine Venezuela’s economy or its government. And this is a continued effort – ongoing, because I do feel like we talk about these incidents once a week at least – about – of the Venezuelan Government to try to distract attention from the country’s economic and political problems and focus and try to distract and make these false accusations.”

Meanwhile, the investigation continues. Nicolas Maduro says Antonio Ledezma tried to abuse his position to organize a violent coup and destabilize the country. New arrests are to follow. The government of Venezuela is adamant in its desire to prevent the events unfolding according to a scenario worked out by the United States Central Intelligence Agency.