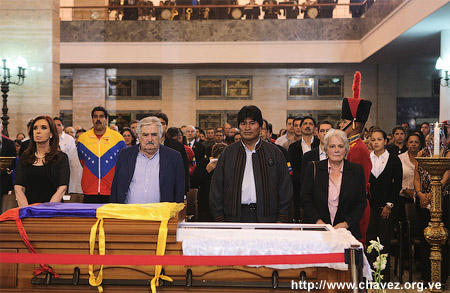 Chavez spent his last days in the army hospital of Caracas. The fourth cancer surgery in Cuba failed to improve his health. He took a decision to return. There were rumors going round that it was in Havana where he died and the Bolivarian authorities were concealing the fact. With evil intent the information was disseminated in social networks. It was imperative to put an end to provocations and attempts to explode the situation in the country.

Chavez struggled for life. He was ready to go through any suffering to preserve the ability to function and take office after he won the October 2012 elections. What disturbed him most was the thought that the tragic end would not let him finish the reforms he had launched. He repeatedly asked Nicolas Maduro what he was going to do without him. Would he cope? That was the reason he repeatedly told General Adelino Ornelas, the head of presidential security service «Please, don’t let me die!»…

The President passed away two weeks after he came back from Havana on March 5 at 16:25. Adelino Ornelas never left him; he said it was extensive myocardial infarction. Perhaps it happened because of a sharp pressure drop over Caracas; Chavez was too weak for it. Vice-President Maduro couldn’t hide the tears, speaking on TV he told the people the President was dead and called upon them to say farewell with dignity and wish the President would rest in peace.

A seven days mourning was declared. No lessons at schools. No alcohol sales. The Armed Forces and the national police watched law and order was observed throughout the country. The next day a hearse accompanied by a huge crowd moved from the hospital to the military academy where Chavez studied in 1971-1975. The official funeral ceremony took place in the Hall of Fame.

The movement was headed by next of kin, Nicolas Maduro, Bolivian President Evo Morales and cabinet members, all walking under hot sun. The hearse was moving for seven hours, the streets were full of people. Something like this, a surge of human grief, took place in the history of Latin America in June 1952 at the funeral of Eva Peron, the defender of the poor, the lady who launched numerous social reforms. It was mainly red color on the streets, the color of Bolivarian revolution: the members of the United Socialist Party of Venezuela (Spanish: Partido Socialista Unido de Venezuela, PSUV) came to the capital from al the corners of the country. Party members and sympathizers held the Chavez pictures, self-made portraits, expressing gratitude for all the good things the President had done for the people, they chanted «Chavez forever!», «The fight goes on!», «We’re all Chavez!». 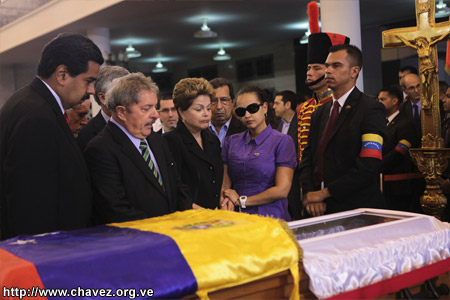 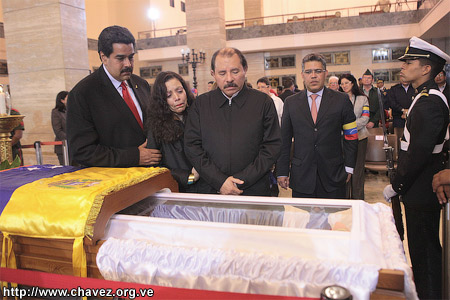 Foreign delegations were waiting in the Hall. Venezuelan Foreign Minister Elias Haua greeted foreign guests during a ceremonial procession. They represented fifty five states from all the continents, including Cristina Elisabet Fernández from Argentina, Dilma Rouseff and Luiz Inácio Lula da Silva from Brazil, Rafael Correa from Ecuador, Daniel Ortega from Nicaragua. Raul Castro froze for a few moments at the coffin, fixedly looking at the face of his Venezuelan friend and comrade in arms. Actually, all center-right presidents came to bid farewell. They came as friends, only at the last moment they started to realize the immense scope of goals the Bolivarian leader set for him following the historic example of Simon Bolivar. He has managed to accomplish what he planned with flying colors, no matter how hard it was. 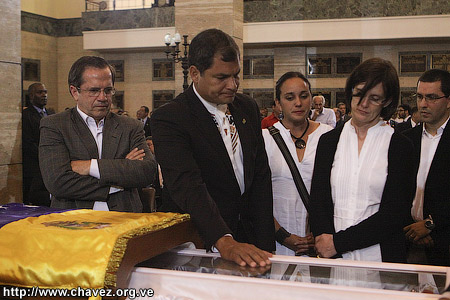 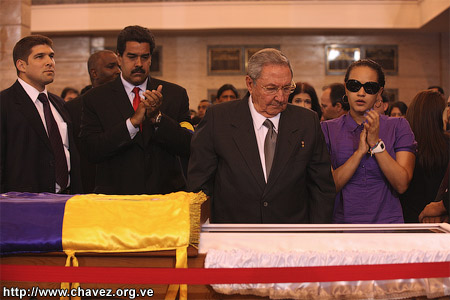 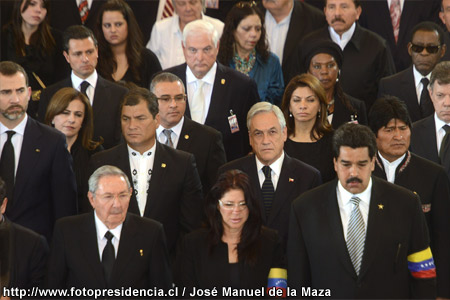 Juan Manuel Santos, the President of Colombia, broke the established order. He didn’t go immediately to the Hall. Instead he approached the fence where the Chavez supporters gathered to shake their hands. He told them that he shared their grief. Santos did a lot to normalize the Columbia-Venezuela relations leaving behind the confrontational policy of his predecessor – Alvaro Uribe. The Columbian President highly appreciated the Chavez contribution into making belligerents in Columbia start a peaceful dialogue. Many heads of states emphasized the Chavez’s outstanding role in launching Latin American integration, creating such alliances as UNASUR, CELAC, ALBA and others. 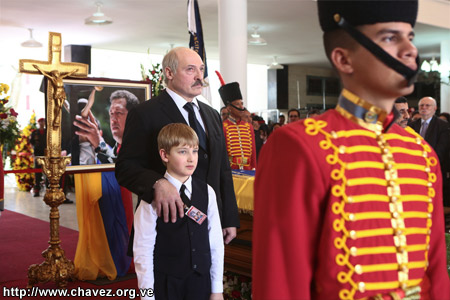 The politicians, who had gone through hard times and stood tall facing everyday life pressures – the XXI century means never a dull moment for all – couldn’t hold back the tears. Alexander Lukashenko, the President of Belarus, wiped his eyes. Iranian President Ahmadinejad, a man of steel and great resolve, shed tears while expressing condolences to Doña Elena Frías de Chavez, the mother of defunct President. Ahmadinejad had been a frequent visitor to Caracas, as well as Chavez to Teheran. The late President of Venezuela has visited Iran thirteen times, no matter warnings and premonitions coming from Washington... 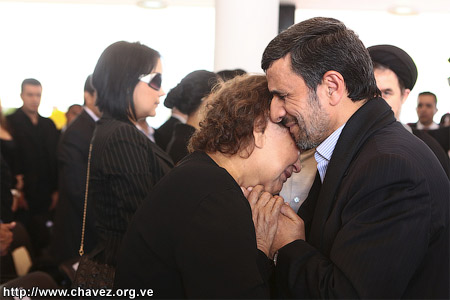 Zhang Ping. head the National Development and Reform Commission, led the China’s delegation. He expressed condolences on the part of former leader Hu Jintao and the newly elect head of state Xi Jinping. Maduro said he was going to continue strategic cooperation with the People's Republic of China after the presidential election slated for April 14.

Before leaving Moscow Russia's Foreign Minister Sergei Lavrov wrote in a condolence book as he visited the Venezuelan embassy to pay his tribute to the late Hugo Chavez. He expressed heartfelt condolences on the part of the Russian federation’s leadership and President Vladimir Putin personally. He wrote that Hugo Chavez was a great son of his people and the whole Latin America, an outstanding leader of our times and a great friend of Russia. He also expressed confidence that the people of Venezuela would stand up and defend the conquests of the revolution against all the odds. He added Russia was by their side…

It was the time of mourning for the whole country, except three privileged districts of eastern Caracas, where well-to-do and top middle class people reside. They are the nucleus of radical opposition that couldn’t reconcile with Chavez even after his death. It was openly a holiday like in Miami, the residence of immigrants from Venezuela, who are hostile to the Bolivarian revolution. 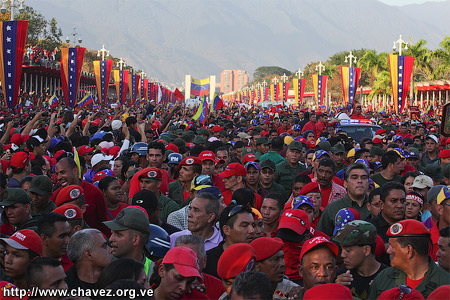 Buses and subway trains packed with grieving people were moving along Los Proceres avenue that leads to the military academy. Western agencies wrote there was a feeling of common grief, especially for common people. A few million wanted to say farewell to their leader, the fearless Comandante, who gave them a hope for better life and then life of their children. For the first time in many years the beaches were deserted. It was seen in the TV reports coming from sea shore state of Vargas, a half hour ride from the capital. 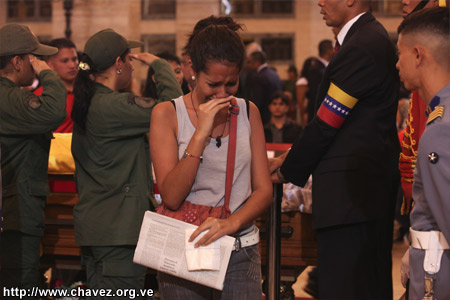 Nicolas Maduro and Diego Molero, Minister of Defense, put down a copy of Simon Bolivar sword, the highest state award in Venezuela. Maduro said the country’s leadership would adhere to vast theoretic heritage left by Chavez. Hugo Chavez- Second Socialist Plan 2013-2019 will become the main document. «The fight goes on, Comandante Chavez!» exclaimed Maduro wrapping the funeral ceremony up. He said, «We’ll not forget the miserable, give a chance to the needy and build great homeland!» 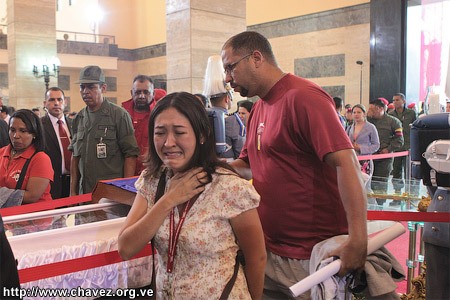 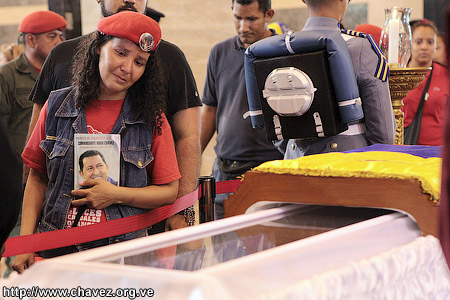 At first, the government wanted to build a Mausoleum on the territory of the Museum of Revolution. Having consulted the experts from Germany and Russia, the idea to embalm the body was refused. There were calls to bury Chavez in the National Pantheon side by side with Simon Bolivar, the Liberator, and great national leaders, including presidents. But it requires a constitutional amendment. Nicolas Maduro promised the Bolivarian deputies in the National Assembly would do everything to make it possible. Now, it is reported the place of temporary grave is discussed with the next of kin.

It is important to note, some say the special services of the United States and Israel have relation to the death of Chavez; they used new lethal technology destined for neutralization of political trouble makers. It is expected that soon a special commission will be formed in order to investigate how Chavez contacted the decease, as well as how some other Latin American presidents have been infected by cancer.