U.S. intelligence agencies are preparing for the developing crisis in Venezuela 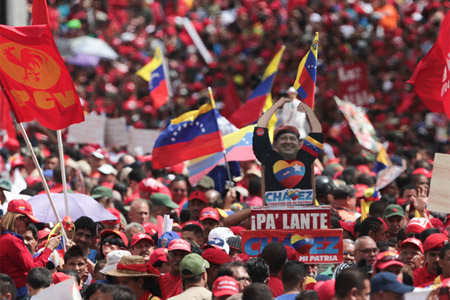 Telesur, the news channel for Latin American countries, established with enthusiastic support from Hugo Chavez, reported live and non-stop from the streets of the Venezuelan capital. Tens of thousands of supporters of the Bolivarian leader, who is undergoing treatment in Cuba, gathered around the Miraflores presidential palace to express their support for Chavez. The President’s persistent struggle against his illness has, without exaggeration, become a rallying point for all people of free will. 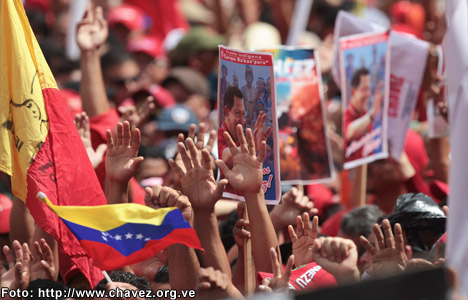 A rally in Caracas was attended by representatives of the countries of Latin America and the Caribbean region, including the presidents of Nicaragua - Daniel Ortega, Bolivia - Evo Morales, and Uruguay - José Mujica. The guests speeches were full of optimism that Chavez will cope with his illness, and return to his country to continue the struggle for socialism, the integration of Latin American countries, and the construction of a new world order, with no room for imperial dictatorships using force to neutralize unwanted governments and seize oil resources. 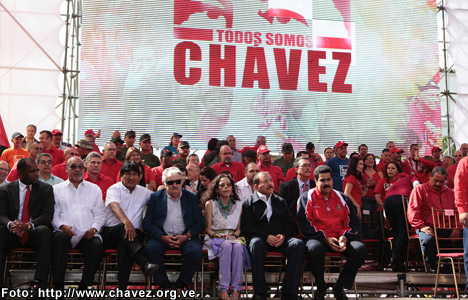 Hostile forces in Venezuela and beyond, are taking the opportunity to intensify subversive activities aimed at overthrowing the Bolivarian government. The conspiracy, which is coordinated from CIA headquarters, is implemented via many channels and is aimed at destabilizing Venezuela, inciting internal conflict in the nation’s leadership, and fanning the feelings of panic over an alleged imminent food and financial crisis.

Indeed, the number of messages on the food theme has increased dramatically, but for a different reason: in various secluded places, police and government supporters keep finding hundreds of tons of maize and wheat flour, sugar, vegetable oil, meat and dairy products. Entrepreneurs, as if on cue, began hiding food, and the opposition media began to disseminate the «expert opinion» that in the absence of Chavez, the government is unable to provide the population with sufficient supplies of essential goods. Such statements provoke frenzied buying of food, and profiteering.

Vice President Nicolas Maduro, speaking at a rally in Caracas, warned Venezuelans that the enemies of the revolution are planning a series of «targeted killings» to provoke riots in the streets of the towns and cities to test the strength Bolivarian leadership. In various parts of the country, stores of smuggled weapons and ammunition have been found, which indicates the involvement of Langley in the Venezuelan crisis. In the state of Zulia alone, which borders Colombia, members of the National Guard intercepted a shipment of 30 thousand rounds of ammunition of various calibers.

Back in September 2012, the former U.S. Ambassador to Venezuela Patrick Duddy recommended to the U.S. administration that they intervene in the internal affairs of the country to help the process of «transition to democracy». Duddy’s recommendations were timed for the presidential elections in Venezuela, in the hope that Chavez would be defeated. That did not happen, but the plan for a «leading role for the U.S. in the future process of orderly and peaceful democratization of Venezuela» still remains. Now Washington is focused on the dramatic conclusion of Chavez’s disease... If anyone has doubts about this, you should refresh your memory by finding on you tube a video showing the triumphant reaction of Secretary of State Hillary Clinton to the news of the massacre of the Libyan leader Muammar Gaddafi. For the U.S. leadership the politics of Gaddafi and Chavez are on a par.

Journalist Jose Sant Roz, author of the book exposing «the CIA in Venezuela», warns that the U.S. intelligence services are preparing for the developing crisis in the country. The number of American correspondents in Venezuela has expanded dramatically, and, according to Sant Roz, many of them specialize in working in «hot spots.» Colombian paramilitaries continue to penetrate the country, supported by operational links with the CIA and U.S. military intelligence in Colombia. These specialists in bloodshed, while holed up in their shelters, protect drug dealers using Venezuelan territory for the transit of cocaine to the Caribbean and Brazil. In the past, Colombian rebels were involved in provocative attacks on foreign embassies in Caracas, the burning of churches and newspaper offices, and attacks on opposition activists and supporters of Chavez. There has been an increase in crimes involving firearms. The law enforcement agencies attribute this to an increase in activity by the CIA. Gunshots can be heard in both rich and poor areas. People are being killed by stray bullets. The opposition is trying to take advantage of the understandable frustration of citizens by mobilizing them with the battle cry that the Bolivarians are unable to establish order, so they must go.

The U.S. Embassy in Caracas, is clearly preparing for an emergency situation, and is constantly filling up reserve stocks of food, water, fuel and medical supplies. Marine Forces guarding U.S. facilities in the country have been increased, and a modernized system of video surveillance has been installed on the most distant approaches to them. The reason is not only that the State Department, but the CIA and the Pentagon have taken into account the lessons of the terrorist attack on the U.S. consulate in Benghazi, where the ambassador and members of the CIA were killed. Efforts to ensure the long-term autonomous functioning of the embassy indicate the validity of warnings by Sant Roz of the United States policy to destabilize Venezuela. In this regard, the journalist called for increased security measures for Nicolas Maduro, Diosdado Cabello, Elias Jaua, Jorge Rodriguez and other Bolivarian activists. An attempt on one of them will be interpreted in anti-government media as the beginning of civil war in the ranks of the Bolivarian leadership for «the Chavez legacy». 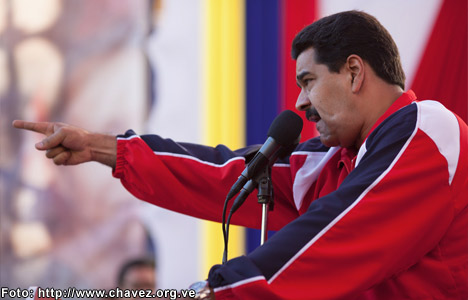 At the rally at the presidential palace, Vice President Maduro and Chairman of the National Assembly Diosdado Cabello, addressing supporters, called for unity and solidarity in the joint struggle for the future development and deepening of socialist reforms. «We have no personal ambition, desire to seize power, or to push aside some non-existent rivals. The leader of the revolution is and will remain, Hugo Chavez, and we all remain members of his team.» This in essence is what a vibrant, very frankly speaking Maduro said. The commanders of the Bolivarian armed forces made statements about the need to preserve the constitutional order, act as guide to the United Socialist Party and of their unconditional willingness to defend the achievements of the Revolution. The aerobatic stunts displayed by a Venezuelan pilot in an SU-30 during the rally, became a kind of symbol of the unity of the army and the people.

The well-known Venezuelan political analyst Luis Vicente Leon, in analyzing the situation in the Bolivarian leadership, said that the vice-president had a lot of work to do to consolidate his position on the Chavist platform. He is politically heterogeneous and often self-contradictory. Maduro will have a long and difficult path, to become national leader. However, he is perceived by the people as a natural successor chosen by Chavez. Maduro is a man of the people! He's just like us! He is a self made man! The bourgeoisie will not be able to bribe him! Maduro has repeatedly denounced U.S. crimes in the international arena. Like Chavez, he is politically steadfast. In matters of principle he will defend national interests to the end. 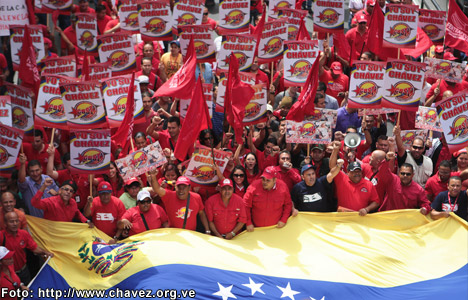 As a result there are sustained propaganda efforts by the pro-American media to create an «alternative» to Maduro, represented by Diosdado Cabello. Cabello’s patriotism is in no doubt. When, in April 2002, he was in hiding from persecution, Cabello knew that the conspirators were hunting for him on the orders of the CIA. They tried to neutralize him as vice-president, and as a legitimate representative of the Bolivarian government. But now the conspirators are trying to forget about this. Rumors already abound of the unfolding struggle between different factions in the Chavistas camp. They are published in the print and electronic media, and embedded in social networks. We cannot underestimate the destructive potential of these systematic attacks. Ernesto Villegas, Minister of Communications and Information for Venezuela, warned in particular, that hostile forces are using a fake micro blogging service on Twitter, pretending to be family members of Chavez, Vice President Maduro and other Bolivarian leaders.

Against the background of the situation developing in Venezuela, timely comments have sounded out from the Information Department of the Foreign Ministry of Russia: «Now it is extremely important to prevent destabilization in Venezuela. That is what the efforts of all political forces within the country and abroad should be focused on. We encourage them to have a balanced and responsible approach ... With a sense of our solidarity; we sincerely wish President Hugo Chavez a speedy and complete recovery. We firmly believe that the inherent strength of the Venezuelan leader and his vital energy will help him overcome his trials and return to the ranks. «The last words echo the comments that President Vladimir Putin wrote to Hugo Chavez in his congratulation message for Christmas and the New Year. The Russian leader expressed confidence that under Chavez leadership the Bolivarian Republic of Venezuela will continue to thrive.

Of significant importance in the Russian Foreign Ministry comments are the calls for strict adherence to the Constitution, and non-interference in internal affairs from outside the republic. But Washington seems determined to conduct reconnaissance in force. The operation involves Leopoldo Lopez with his far-right «People's Will» party (Voluntad Popular), financed from CIA funds. The formal pretext for the organization of protests is the disagreement with the decision of the Supreme Court of Venezuela to postpone the inauguration of Chavez due to his illness. «This is a violation of the constitutional order, without any reason», stated Lopez, who has repeatedly demonstrated his «law-abiding» nature in violent anti-government actions in 2002-2003.

«We cannot sit home and do nothing», said Lopez. «We will occupy every square of the capital, to peacefully express our protest.» Reports of the true plans of the «People’s Will Party» are becoming more and more alarming. The near future will show what kind of challenges Lopez has been faced with by the resident CIA.